Must see historical locations in Ioannina 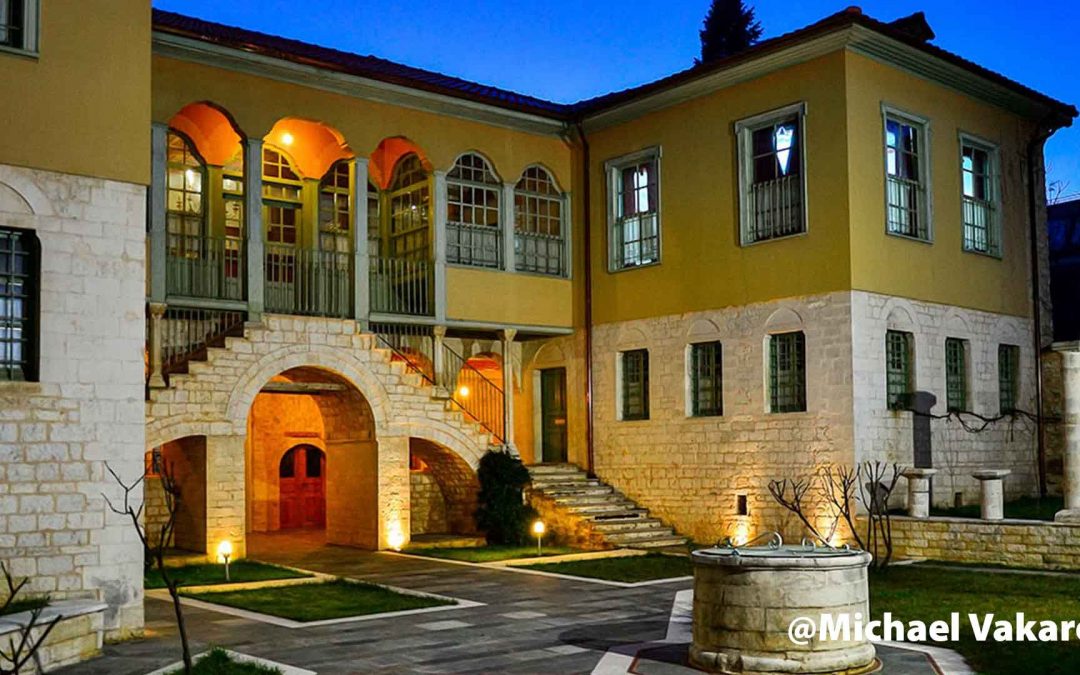 Pilgrimage Martyr St. George
Located in front of the main gate of the castle. A few meters further Neomartyras George (patron saint of Ioannina) was hanged on January 17, 183

House Martyr St. George
After the martyrdom of St. George on January 17, 1838, the faithful citizens made the site of the house a pilgrimage. One of the rooms was converted into a chapel for the operational needs of the faithful. Located at Mavrogianni 84.

The Mansion Missiou
It is the largest, most representative and most famous of the town’s surviving mansions. It has all the typical elements of the Turkish-Ioannina style and is considered an excellent model of traditional architecture. The mansion ended on May 18, 1844 and was built on the traces of the pre-existing building that was incinerated in the fire of 1820. The house was hosted upon the liberation of Ioannina in 1913 by the prince and later King George II, the successor Constantine and the Prime Minister Eleftherios Venizelos. Today the historical monument belongs to the Ministry of Culture.

Promachonas Litharitsia
Bastion Litharitsia is built on the homonymous small hill, located in a short distance southwest of the Castle. This impressive work, a sample of the late Ottoman fortification was built by Ali Pasha around 1800.
Bastion and a number of other fortifications that were built in the rugged hills between the hill and the Castle, were a protective barrier in front of the Castle of the city, a first line of defense. The masonry of the bastion is of strong rubble. Its ground plan has a roughly rectangular shape and divided into many levels. In the upper part it was equipped with cannons, while in the lower there were gun emplacements. Great monumental double staircase was discovered on the western side during cleanings, made in 1983. Underground with strong vaulted ceiling completed the defensiveness of Bastion. At the hilltop Ali Pasha built, in 1805, a large seraglio, designed by the architect Freywald, who was invited from Vienna with the mediation of Giannioti merchant Ioannis Stavrou. This building, as reported by the British traveler W. Leake, although it was not as spacious as the seraglios of Sultans of the Bosphorus, had magnificent view. Today, in the indoor vaulted spaces of the once powerful bastion there is a café – restaurant. Located at Mavrogianni 84.

House of Levi I.
It is one of the many Jewish buildings that survive. It was built in the second half of the 19th century by David Levy, a military surgeon. The building housed a private school for many years and is therefore known as the Lyceum. Discover it on the north side of the castle’s outer walls

House of the Jewish Community
Typical Jewish building of the 19th century, now inhabited. Koundourioti Street, which houses the building, as well as Yosef Eligia Street, were the streets in which mainly Jews lived. Discover it on the north side of the castle’s outer walls. Entrance is free of charge. Operating days: By appointment at 26510-25195

Papazoglios Weaving School
The Neoclassical building, the work of Pericles Melirrytos and maybe the first time since its establishment in Giannina. The School was commissioned by Aggeliki Papazoglou, a benefactor of Zagori. The Papazoglios Weaving School today does not work and its building serves the teaching needs of the city. The palace is characterized as a preserved historic monument.

The Tzavella Mansion
From the most beautiful houses of Ioannina with neoclassical architectural elements. The involvement of an architect in the design of the building is obvious and his name was not rescued. Historic was the family of landlords. National fighter was the lawyer George Tzavellas. The daughter of Ismini gave her house to the Municipality with all the great value of a house to become a museum of traditional Yannionian residence.

ThePirsinella Mansion
The mansion of Pirsinella – the Makris family – was built between 1830 and 1840 on the ruins of the earlier house destroyed by the fire of 1820. In its original form, it was surrounded by tall stone walls like all the Ioannina mansions. This historic and artistic preserved monument belonged to the Makri family, old rulers. The head of the prominent family is Vissarion Makris (1635-1699). You will find it on the Papazoglou Pedestrian Street.

The House of Despot, Hussein – Bey House
An old mansion built in the late 18th century, is the only one that was saved by the fire of 1820, thanks to the extensive vineyards that surrounded it. On Ottoman domination he belonged to the Hussein-Bey family. The name “House of the Despot” is due to the fact that the seat of the Metropolitan of Ioannina was for a considerable time. This mansion house is classical in its kind. It is considered a masterpiece of traditional architecture.

Stoa Louli
Stoa Louli was built in 1875 and the arches at the entrance were moved from Italy. Originally, the arcade functioned as a mansion, where people from the villages lived when they stayed in Giannina.
Slowly the hani became a point – a node where people from all over Epirus were gathering to begin their long journey to Athens. The constant movement of so many people resulted in the conversion of the gallery into a commercial center of the time. First they developed commercial activity at the Stoa, Jewish merchants of Ioannina, who operated shops for fabrics and skins. For the past forty years, the Stoa has operated mainly Ironworks, Winery, Woodworks and warehouses of various uses. Recently the Louli stoa has been restored by the Archaeological Service. Today it mainly houses entertainment and dining establishments.