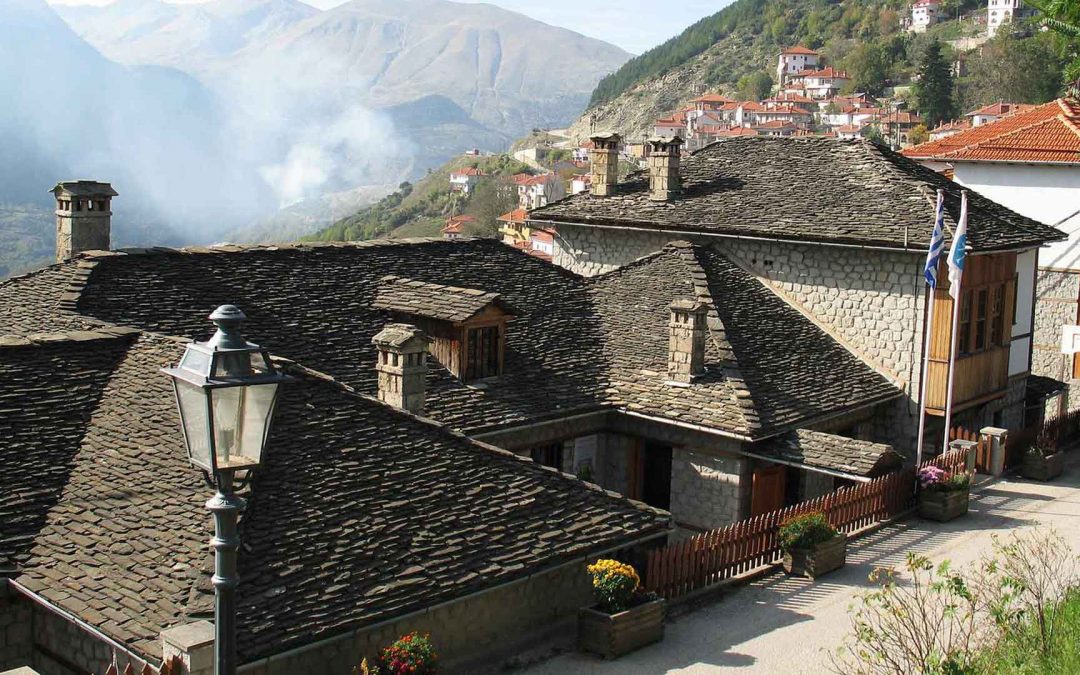 History of the place
Metsovo is mentioned for the first time in 1380 AD. in the anonymous chronicle of Ioannina, where the monk Isaiah is referred to as the renowned Metsovo, while the inhabitants of the region are vulgar and are called “bouzouki” or “bourtzolaki”.
The origin of place’s name is not verified. It is argued that it can be Slavic and that it means “arcoudochori” from the Slavic words “meskka”, which means bear and “ovo”, meaning village. This view does not seem right because the bears are everywhere in the wider region. Metsovo, in Koutsovlachikas, is called “A-mitzzius” meaning “in Mitzio” and in old texts is written “Metsovo” and “Mesevo”. It is possible that the “mitzzio” – “Metsjo” is a corruption of the “medium” and with the addition of the Slavic “ovo” became “Metsovo”. The oldest name of the village may have been “Middle” or “Middle-verse”, which indeed indicates the topographical position of the site, in the middle of the area.
Regarding the origin of the name Vlachos, there is the view that the word Welsch or Walachen was called by the Germans as Latin-speaking Italians, Swiss, Belgians, French and Vlachs of Romania, who for many centuries were neighboring. In their descent to Romania, the Slavs were subordinated to the Germans and Goths of Transylvania, where they came in contact with the Latin-speaking Vlachs. There, listening to the Germans calling them Welsch or Walachen, they also called them Vlachs in their language, ie, Latin-speaking. From the Slavs the word Vlachos = Latinophone was spread in the Balkans.
In Metsovo, in addition to the Greek language, it is used in a narrow, family, friendly and professional environment as a verbal language only and the koutsovlachiki. These are the “Vlachikas”, a neo latinic idiom known in linguistic circles with the neoological “Aromanian” derivation of Aromounius, which is called the Vlachs or Koutsovlachas of the Greek countries. The genesis of the “Aromanian” dates back to the appearance of the Romans in the Greek peninsula, and its cradle is the ancient road that connects West – East, the later Via Egnatia. Among the Greeks, the first Latin users are the representatives of the Greek cities, who were obliged to communicate with Rome in its official language. Here are the Greeks serving in the Roman army and returning to their hometown they undertake the guarding of current road junctions and especially mountain passages, such as the passage of Libra to Metsovo. The knowledge of Latin is a necessary resource for the public servants of the Roman state, who selects these individuals preferably among the Greeks. Also useful is Latin for merchants, hoteliers, professionals, scientists who want to move freely and profitably into the huge space of the Roman Empire.
Metsovo has enjoyed privileged treatment throughout its long history, contributing to survival and accelerating growth in difficult times. In 1430 AD, privileges were granted to the locaks of Metsovo by Sultan Murad II as a reward for the good behavior of the Metsovite Prisoners of Zygou to the Turkish troops of Sinan Pasha, who headed to Giannina.

People and Culture
Mountain farming has been a key growth factor and a way of life for centuries in the wider region. Already in 1719 Metsovo served as a central sheep and goat export store for France. Because of the adverse weather conditions, mountain pastures are not used throughout the year. Thus, the nomadic breeders are transported in the Thessaly plain in the winter and in the summer pastures in the mountain pastures. Wood processing is today the most important resource and perhaps the main source of income, along with tourism. A large part of the population is engaged in the logging and processing of wood from the old days to the present. In Metsovo, Milia and Anilio, folk art is one of the most important occupations of the inhabitants. Textile has a long tradition. Local textiles created ornate woven fabrics, carpets, cellars, trowels, burchshoots, flocks, etc., with methods and tactics that have passed back many generations. Cheese is another development pole. In Metsovo has been operating since 1958 the Tositsa Foundation cheese dairy, which absorbs almost all milk production in the area.
A long tradition exists in wine making. Since 1732, annual wine production exceeded 500,000 bottles. After many years of set-aside, the vineyards of Metsovo grew again, thanks to the idea of ​​Evangelos Averoff Tositsa to create the Katogi winery. Metsovo and the surrounding villages created a peculiar society, influenced by the way of life in the mountains of Pindus, which through celebrations and festivals has spread to our days. Thus, the musical tradition of Metsovo is markedly different from that of other regions. In Metsovo there are three kinds of dances, the circular, the cohabit and the women’s dance. A common building block of all these is improvisation and emotionalism. At the fairs most of the residents, dressed in traditional costumes, dance the three dances of Metsovo and they are eaten until the early hours.

Traditional architecture
Metsovo has historically been the most representative settlement of the villages of Central Epirus Pindus and has always been one of the most active settlements in the country. Today it is one of the most famous traditional settlements in the country. His reputation is mainly due to the beauty of the village, the cultural heritage, its traditional character, the many national benefactors and the rich natural environment.
The climate of the region is continental and is characterized by cold to severe winter; it is rich in rain in the spring, while the summers are relatively warm with lots of rains. It is noted that it has one of the highest rainfall indicators in Greece.
As far as its urban features are concerned, the settlement of Metsovo is built on a sloping slope with a large slope with SE orientation. It is a monocentric settlement, in the square of which meet the two main roads that define the village’s mast. There are also, secondary, inland-service roads, the development of which is consistent with the slope and the versatility of the natural soil.
The streets are serpentine, narrow with a width of 2-4 meters. Along the streets, the mansard walls of the houses with the hinged sidewalks and the overhangs of the floors are being developed. The cobbled streets are paved with elevated strips approximately every half meter for the safety of the walk and the drainage of the water in a right or left groove as needed.
Metsovo is a closed-type settlement, which is distinguished by dense construction with limited access. As for its typology, the traditional house is divided into two types. The first one is the three-room flat-topped house and is the folk house, while the second one is the four-storied mansion and constitutes the mansion (apart from the one-room hut used as a place of residence in the livestock housing).
In terms of home architecture, the bulk of the house is oriented to the south or southeast, while the distinction between winter and summer accommodation is particularly interesting . Building users stay in different rooms (different in orientation and size of openings) to ensure the best possible comfort conditions. As a result, the whole family used winter in the winter or “beasts”, while in the summer the family lived in the “cottages”, a room with more openings that ensured ventilation.
Traditional buildings in Metsovo are made of stone walls with a high thermal mass; while the internal walls, floors and ceilings are made of wood (the ceilings offer thermal insulation). These building practices are in line with the strategy presented earlier. The use of the tattoo on the outer walls on the floors is relatively limited and decreases over time, probably as a result of building development but also because the thermal mass as a design parameter during the summer season is more efficient at the higher temperatures.