Looking for the hidden mosques around the city 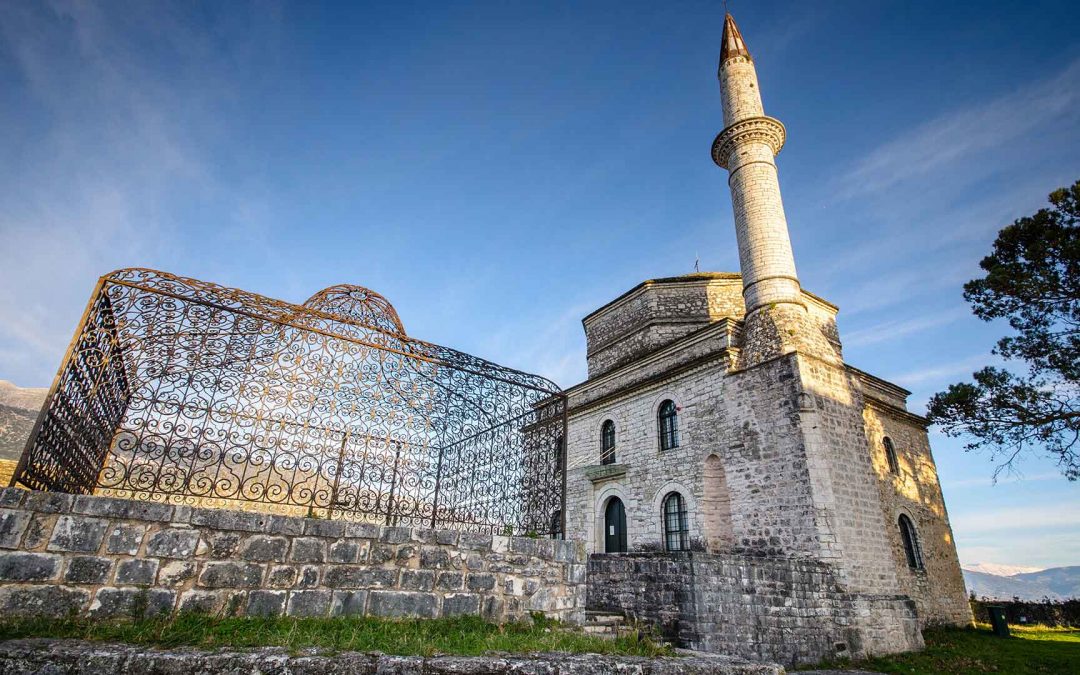 Aslan Pasha Mosque – Municipal Museum
Municipal Ethnographic Museum Ioannina is located in the castle and is housed in the mosque of Aslan Pasha built in the early 17th century (probably in 1618) by Aslan Pasha, who ruled in Ioannina during the period 1600-1612.It was built on the site where according to tradition during the Byzantine era, the church of St. John was there. The Mosque of Aslan Pasha was the core of a large religious – educational complex, from which today survives the homonym Tourbes (mausoleum), the Mendreses (seminary) and Mageiria (hearth and home). The Municipal Museum houses three collections, representative of the castle residents during its long history: Christian, Jewish, Muslim. The objects are donations of prominent families, dating from the 18th to 20th century and utensils with utilitarian and decorative nature of various metals or porcelain. Also, one can see weapons and costumes typical of the Ottoman period. The objects of the collection of Christians include ecclesiastical silverware, vestments and church books from the collection of Archbishop Spyridon. In the Jewish collection curtains from the building of the former synagogue, etc. costumes once thriving Jewish community of Ioannina are exhibited. The objects from the Muslim population are exhibited in the central area. There are oriental fabrics of the 16th, 17th and 18th, wood furniture and ivory, era of Ali Pasha, bronze objects and Islamic books. In the areas surrounding the mosque there is a powder keg, the cave of Dionysios the Philosopher, prominent Turkish tombs and a medieval tower. Very close to this Citadel there are 3 important monuments of the Ottoman period. These are the Bath, the Turkish library and Soufari seraglio.

Fethiye Mosque
In the easternmost and highest point of the citadel Kale, dominates the Fethiye Mosque. According to tradition, the mosque is built on the site of the earlier Byzantine church of the Archangels. Unique relics of pre-existing Byzantine church are the two small pillars of marble iconostasis of the 13th century, which is built-in niche (mihrab). According to sources, in the 15th century, after the subjugation of the inhabitants of the city of Ioannina (1431) to the Ottomans, the first Muslim “metzit” (religious institution), named “Fethiye” was built on the spot.
This is the Turkish version of the word “conquest.” In the 17th century, Jalal Pasha assumed the cost of the construction of the mosque. According to historical sources, it was a magnificent mosque that impressed visitors. According to written sources and scanty archaeological evidence, reconstruction of the church took place in 1770. At the end of the century, it was the core of religious life in the Citadel Kale and around 1795, it was restored by Ali Pasha to operate as a temple of seraglios. In recent years the 8th Ephorate of Byzantine Antiquities, conducted a series of restoration and mounting work on the building.

Mosque and Madrassa of Veli Pasha
The mosque of Veli Pasha or Tsiekour-mosque is located on the south side of the hill of Litharitsia, in the middle of a large uncovered area formed by the southeastern outskirts of the hill and from the eastern slopes of the central plateau of the “upper city”. South and east of the area the Tsiekour districts and Plithokopio grew. Together with Mendrese (seminary) that is built to the north of it, they were inseparable foundations of seraglios, which were built alongside by Ali Pasha for his son Veli. The mosque consists of a large, square, domed hall, to the west of which develops an enclosed porch which seems eas closed in retrospect, and while there is evidence that it was originally open. After the release, it has been a building of cantonment, it was granted to the Ministry of Culture, and then the Mosque along with the accompanying buildings (Mendreses and Galleys) were granted by decision of the Ministry, to the Municipality of Ioannina. The Mendreses (seminary) is located in a short distance from the mosque of Veli Pasha. In Mendrese, which Ali Pasha built (late 18th c.) in his quest to complete a religious center near the adjacent serai of his son Veli, students who were taught theology and philosophy resided. It was the upper school unlike Mehtepi, ie lower ranked schools. The Museum of the National Resistance is housed today in the Mendrese of Veli Pasha.

Mosque of Kaloutsiani
The Mosque of Kaloutsianis is located in the central square of the homonymous district of the city. According to the wall inscription (unknown date) the Mosque was built in 1740 by Haci Mehmet Pasha, vali (governor) of Ioannina, in place of a metzit (Ottoman temple without a minaret).
According to scholars, the mosque is named after the outbreak of the revolutionary movement of Dionysios the Philosopher in September 1611, which was centered here. The name comes from Turkish words meaning blood and faucet (Cesme = tap, kan = blood). Testifies, in this way, the tragic for the Christian population of Ioannina, ending of the the movement of Skylosofou.
As usual, the mosque gave its name in the surrounding area, which over time became Kaloutsi(asmi) – Kaloutsiani. The type is indicated in the 1874 and 1878 documents and is mentioned by Paisius (1690), E. Çelebi (17th century) and I. Lambridis (1886). Until the liberation of the city of Ioannina, in 1913, the mosque served as a muslem mosque. After the release, it came as exchangeable to the ownership of the National Bank, housed for a while the bus station and then sold off to individuals. Recently, the expropriation by the Ministry of Culture has been completed and a set of works is run to improve the image of the monument and to remove botched constructions that have accumulated in the building by the long, incompatible with the mosque, use.