In central Zagori with its authentic hamlets 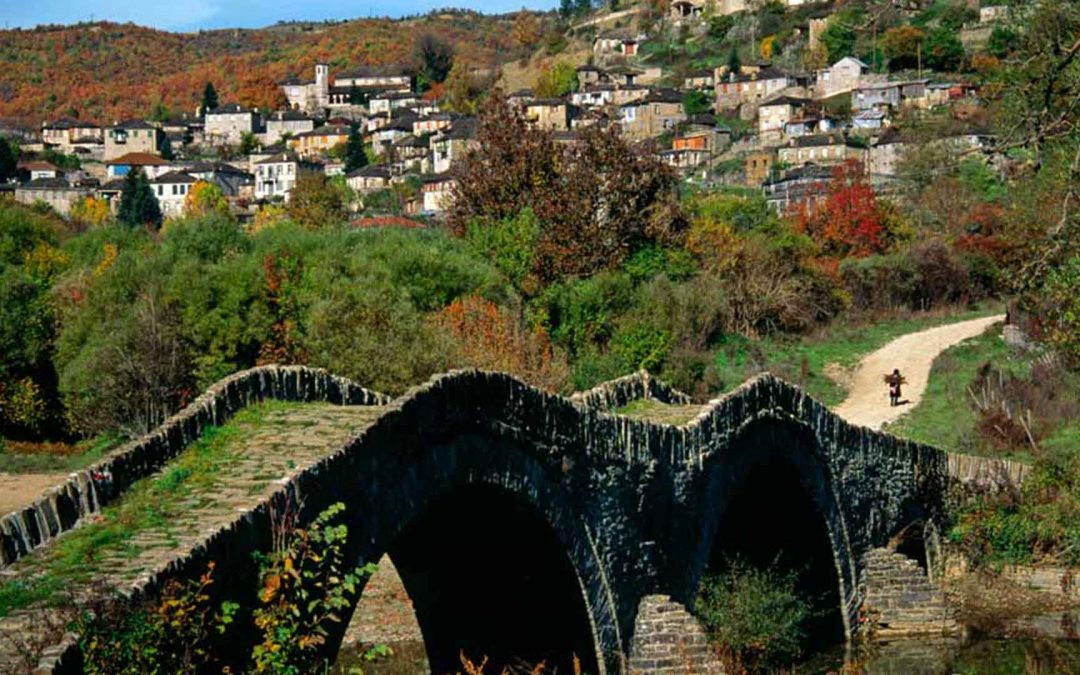 Monodendri
Monodendri is built at an altitude of 1060m in central Zagori and is 39km from Ioannina. The name of the village is due to the large fir tree that existed in its square until 1840. Monodendri is one of the most frequent destinations of visitors to the area, as it has many beauties and attractions and at the same time offers easy access to the famous gorge of Vikos. Follow the downhill stone path that starts next to the church of Agios Athanasios and after a short while it will take you to the lower point of Vikos. According to a sign of the area, the ravine has entered the Guinness Book as the deepest, with a depth of 900 meters and an opening of only 1100 meters.

Vitsa
Vitsa is built at an altitude of 990 meters and is located in central Zagori very close to Monodendri. It is one of the largest villages in the area of ​​Zagori and is 38 km from Ioannina. You will be enchanted by the simple, stone houses with beautiful architecture. Walk through the picturesque cobblestone streets and enjoy the tranquility of nature. If you wish you can follow the path that leads to the stone bridge of Misiou which was built in 1748 by Alexis Misios. The churches of Vitsa are the Prophet Elias dating back to the 17th century, the Virgin Mary’s Monastery and the 17th century Taxiarches Temple.

Kipoi
Kipoi is the capital of central Zagori and is built at an altitude of 800 meters. Around the gardens you can admire many picturesque stone bridges as the village passes by the Bayonikos river. At the exit of the settlement is the third bridge of Mylos which was built in 1748. It has two main arches and one smaller one, which makes it different from the other bridges of Zagori. Another bridge of the area is that of Pitsionis, which is a one-stop shop located on the right side of the road, outside the village. The bridge was built in 1830 by Theodoros Pitsionis. At Kipi you can visit the church of Agios Nikolaos that was built in 1779 and the Monastery of Panagia that dates back to the 19th century. The well-known Folkloric Museum of Agapios Tolos is in the village. Here you can admire 40000 exhibits from the everyday life of the inhabitants of the Zagori region

Negades
The beautiful village of Negades is located in central Zagori east of Kipi. Where there are no longer permanent residents. The old mansions dominate and the atmosphere of one of the most beautiful villages travels the visitor. Surely you will be amazed by the simple church of Ai Giorgis at the entrance of the Negades. In the village are also the churches of Agios Dimitrios and Agia Triada.

Koukouli
Koukouli is located in central Zagori between Vitsa and Kipi and is 38 km from Ioannina. It is a beautiful village with old mansions surrounded by lush forests. Getting out of the village, on the way to Kipi you will meet Kalogerikos bridge, which looks like a caterpillar on the go. Another stone bridge of the area is that of Kontodemos or Lazaridis, which was built in 1753 in the gorge of Mikro Vikos. It is also known as the bridge of Lazaridis because of the teacher Kostas Lazaridis who lived in Koukouli. It is stone-built, made with a bow and is kept in a very good condition. The bridge is reached by a built path that connects the villages of Baia and Koukouli.

Dilofo
Dilofo is a beautiful village in Central Zagori, at an altitude of 880 meters. Walk around and admire its old mansions and stone churches of the village. The cobbled paths will surely lead you to the beautiful church of the Assumption of the Virgin built in 1857. At Dilofo is also the highest house of the region of Zagori with a height of 13.5 meters.

Vradeto
Vradeto belongs to the villages of central Zagori and is located to the northwest of Kapesovo. It is the tallest village in the area since it is built at 1350 meters. This feature gives us spectacular views of Vikos Gorge. Close to Vradeto is the location of Belois, from which one can have the best view of the Vikos Gorge.

Kapesovo
In central Zagori, before Tsepelovo we meet Kapesovo. It is built at an altitude of 1100 meters. In the village you will see one of the most beautiful churches of Zagori, Agios Nikolaos. The stone church built in 1793 will charm you with its picturesqueness and humility. In Kapesovo you can stroll through the stone cobbled streets among the beautiful mansions and visit the Paschalio School with its Folklore Museum and its library.

Tsepelovo
Tsepelovo is located in central Zagori at an altitude of 1080 meters on the slopes of Tymfi. It has the most inhabitants of all the villages of the area and is the seat of the Municipality of Tifis. Its location is particularly privileged as it is located in the center of the northern Pindos National Park. The main village of Zagori was the birthplace of the great Marika Kotopouli, a part of her father’s who still lives up to today and Dimitrios Myrats. In the village is also the tomb of the poet and doctor Ioannis Vilaras. It is one of the most famous villages and one that is very touristy. Tsepelovo is bustling with old stone mansions, scenic cobbled streets, bridges, fountains and beautiful churches. In this square on the 15th of August there is a big festival lasting 3 whole days.

Skameli
Skamneli is located in central Zagori on the road after Tsepelovo. Visit the Monastery of Agia Paraskevi which is built on the rock of the Radius at 1250 meters. If you are in the village on the day that the Monastery is celebrated, you will experience the three-day feast of the village organized in honor of the Saint.

Ano Pedina
Ano Pedina lies south of Elafotopou and belongs to central Zagor and is built at an altitude of 960 meters. It is a traditional village with stone houses and old cobblestone streets. In Ano Pedina, you can also visit the Ostrich Chalice Farm and learn a lot about these nice birds. Very beautiful is the monastery of Evangelistria built in 1790 and Agios Dimitrios (1793) located in the village.

Kato Pedina
In Central Zagori, west of Ano Pedina lies Kato Pedina. They are built amphitheatrically at an altitude of 940 meters. The only church in the village is Agios Athanasios, dating back to 1704.

Elafotopos
The Elafotopos stands at 1,100 meters. In the area, finds that archaeologists place in the 19th century BC have come to light. In the northwest part of Elafotopos you can visit the ruins of the fortress dating back to the 4th century BC. In the village there is a folk museum with interesting exhibits. The churches of Elafotopos are also beautiful: Agios Georgios built in the 19th century, Agios Nikolaos built in 1857 and the Assumption of the Virgin dating back to the 17th century.

Asprangeli
The village of Aspangeloi is built at an altitude of 1000 meters, and has a picturesque square with the big plane tree and the old well. In the village, sports enthusiasts will find a hang gliding track and a shooting range where international races are organized.

Elati
The village of Elati is located between large pine trees and firs as its name suggests. The old village was destroyed by the Germans in 1943 and the new settlement was built in a verdant area at an altitude of 960 meters. In Elati is the temple of St. George built in 1806.

Dikorfo
Dikorfo is at an altitude of 1000 meters. Walk through its stone cobblestone streets and admire the old mansions and its library. In the central square you can visit the church of Agios Minas dating back to 1770.

Kalota
The village of Kalota is built at an altitude of 840 meters in a beautiful location. His name is due to the Kalota family, who settled in this place in 1540. The village was destroyed in 1943 when the Germans burnt it. In Kalota you can visit the monastery of Vissokos Panagia dating back to 1114, as well as the church of the Metamorphosis of the Savior built in 1854 and has a beautiful imposing bell tower.

Dipotamo
Central Zagori’s Dipotamo reaches 840 meters in altitude. It is built between two rivers and the vegetation of the area will impress you. In Dipotamo you can visit the church of the Assumption of Virgin Mary built in 1872.

Vrysochori
Vrysochori is a village of central Zagori and is built in the valley of Aoos. You will find it at an altitude of 1000 meters 42 km from Ioannina. In the center of the village there is a beautiful central square in which the great plane tree is characteristic. In the square is also the church of Saint Charalambos built in 1819.

Heliohori
Ilhochori is located in central Zagori, south of Vrysochori. It is built on a steep slope of the mountain at an altitude of 1040 meters. In the area there are plenty of running waters, which together with the stone bridges and the lush vegetation make the scenery dreamlike.

Laista
Lаista is one of the most impressive villages of Zagori with an altitude of 1020 m and is 80 km from Ioannina. The settlement dates back to 1580 and during the 18th and 19th centuries it was a period of great prosperity. It was the only town in Zagori.
Today, see the church of Pammegiston Taxiarchon dating back to 1770. It is a magnificent temple with a magnificent temple, crafted with the technique of deep relief and many representations from the Holy Bible and mythology. The chapel of Ai-Giorgis with the tree where Patokosmas Aetolos spoke in 1778 just ten minutes from the village. The village is built at an altitude of 900m. The Manassiotes traveled to Romania, and wealth was plentiful in the village. It was a village famous for its mansions, for its fine wine, but mainly for its inhabitants and its wealth. An important monument of the village is the church of Agios Georgios 1780.

Leptokarya
The village of Leptokarya is 60 km from Ioannina. It is a beautiful village in the green that does not have the traditional color that you expect to see in a Zagorohoria. It is worth seeing the stone bridges around the village and the churches of Ag. Athanasios and St. Nicholas. Southeast of Frangades, on a small hill (Paliomonastero), the ruins of an old monastery are preserved, which, according to the tradition, was dedicated to the Taxiarches Gabriel and Michael and belonged together to Frangades and Leptokarya.

Fragades
Fragades is a picturesque village, built amphitheatrically at an altitude of 960 meters, opposite the imposing Mitsikeli and 58 km from Ioannina. The stone church of Agios Dimitrios (1779) with its imposing polygonal bell tower is an impressive sight of the village. The same is the central square with the big plane tree, the temples of Agios Dimitrios (17th century) and Panagia, the well-preserved stone houses and the old Valema watermill.
From  Frangades, it leads to the bridge of Petzioni and to Dipotamos after 2 hours of walk (Z23). Other paths lead to the waterfall of Tolo, Mylos of Alexandris and Saint Christopher.