Feel the religious interest in Igoumenitsa 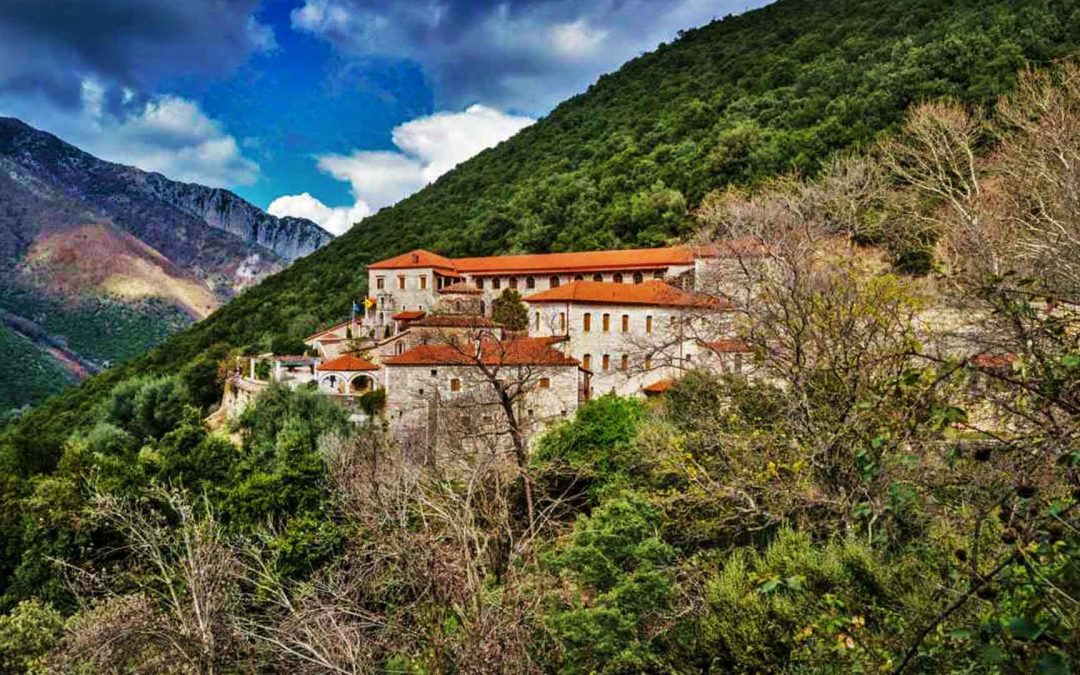 HOLY CHURCES
Religion and faith for us, the Greeks, have always been an integral part of our national identity. The holy sights, indissolubly linked to the local culture and the art of the era, attract every year the interest of tourists seeking the deeper knowledge of traditions and art with religion.
Look for the eternal symbols of our Christian faith in the temples and the ascetics that dominate with their simple architecture in the beautiful locations of our Municipality and feel a sacred awe under the gaze of ascetic forms and devotion from the nature that submits to the spirituality of the places.

SAINT ARSENIOS OF MARGARITI
Southeast of the village of Morphi (old Morphati), in a small cave of Mount Erimitis (518m), where nature dominates, the Aghios Arsenios Acquarios dominates.
Dedicated to Saint Arsenios, the chapel, according to an inscription on the right-hand side of its iconostasis, was painted by the Chionades hagiographers Anastasios and Pantoulis in 1872. The temple of the Temple is stone-built, while the frescoes that exist, Saint Arsenios, paradoxically , depicted not as a monk, but as a hierarch.
Saint Arsenios is the protector of the village and his memory is celebrated on 8 May. On this day the pilgrims gather in the cave in the chapel to honor and praise him. It is thought to be miraculous, and that is why the water running from the roof of the cave and church is gathered in bottles by the believers and holding it as a holy water.
The site is of religious and natural interest and there is also easy access via a path that starts from the village of Morphi.

AGIOS ATHANASIOS PERDIKAS
At the foot of the western slope of the mountain of Agia (927 m.), Next to a small river with many wild plains and olives around it, and at a distance of about 4 km from the village of Perdika is one of the newest monasteries of the prefecture Thesprotia, dedicated to St. John the Baptist, Athanasios.
The Monastery of Ag. Athanasios Perdika was built on the mountainside, but in 1811, as mentioned in the external lintel of its katholikon, it was moved to its present location. An occasion for the monastery’s construction, according to tradition, was the discovery of the miraculous icon of St. John the Baptist. Athanasios on the large olive tree, which is located near the sanctuary of the Catholic Church.
There are no hagiographies inside the temple, and its portable icons, Athanasios (one large on the south wall of the church, another smaller one, 1967, on the Northern Wall and the miraculous, of course, in an iconostasis).
During the Feast of the Monastery on 2 May, a daily feast is held in the adjacent olive grove while on the eve is the transplantation of the miraculous icon. It is recommended not only for its religious, but also for its naturalistic interest, as close to the monastery, there is the homonymous 2 kilometer-long walking path, a wooded area near a river that expands to Karavostasi.

HOLY ISLET
Ιn the pine-covered little island of Agionissi, at the entrance of the Ormos of Igoumenitsa, there is the katholikon of the Monastery of Zoodohos Pigi, the monastery of the Giromeri Thesprotia Monastery.
In the middle of the island there is an old daedaron devoted to Zoodochon Pighin, indefinable chronology. Traditionally, many years ago there was a Man’s Monastery. This is evidenced by the survival of ruined cells, a well filled today, as well as by the finding of many human bones during the recent refurbishment of the temple. Besides, there are no additional historical data on this Shareholder. ”
The katholikon of the Zoodochos Pigi Monastery is a small one-aisled basilica, without pronaos and frescoes. On the outer west side of the church, a small inscribed plaque has been built, with an illegible date.
In the west of the church there are the ruins of the monastery’s cells, while in the north, there is a reservoir of rainwater. The entrance of Agonisi is made by boat from Igoumenitsa (half an hour). On the day of the celebration of the Monastery, on Friday after Easter, the caiques from Igoumenitsa start carrying the faithful and are performing divine service.

MONASTERY OF TAXIARCHES
“The Monastery of the Taxiarches of Souvilia (the old name of the village of Aghios Vlassios) or Ai-Michalis and” callos made “- meaning” big church “- according to the locals, is located on the Northern slope of a small hill and at a distance of 3 about a kilometer from the village.
The only one known from the monastery’s history is that it was founded in the 17th century, namely in 1637, according to Muselimis, or in 1607, according to Sarra. From the old monastery, only the dilapidated katholikon and few ruins around it survive. The walls are made of chopped squares of spelled, without wedges and smaller stones, that is, inland art and construction. Apart from each row, double glazing is passed.
The katholikon of the monastery, a small single-aisled basilica without pronaos, presents today (1995) cracked walls and suspicions of only hagiographies on the inner surface of its walls. His future is therefore predetermined!
Near the Monastery of the Taxiarches of Souvlias (10 ‘walk), there is the new chapel of Ai-Donatos (until there is a car going), built, as it seems, in the ruins of old, dedicated to the same church. There is an underground cavern, with a very narrow entrance, which leads to neighboring Kalamas (old sink?) From a tunnel with stalactites, between Ai Donato and Ai-Mihalis. At the feast of Saint Donatus, the young men of the neighboring villages follow the path of this underground river, seeking from metaphysical curiosity the traces of Archangel Michael for the underworld! ”

SMALL CHURCHES
Perched on the top of a mountain or by the sea below the Greek sun, hidden in caves or carved in rocks, our churches expect peacefully the humble traveler to discover them. Pure Creatures of Divine Worship promise to offer you generously the tranquility that exists in silence in a unique landscape worthy of the grandeur of the surrounding area.
Everything has something to tell you and a story to whisper to you. Take them and feel the depth of spirituality they hide.

MONASTERY OF GIROMERI
Giromeri Monastery is one of the most famous monasteries in the region of Epirus.
It dates back to 1,300 and is dedicated to the Assumption of the Virgin Mary. The Giromeri Monastery, is one of the – unfortunately – few monasteries in Epirus, which are manned and operating. Today’s Brotherhood consists of three monks and settled in the Monastery in 1989. Since then, he has been diligently working on the restoration and maintenance of the building complex, which over the centuries has suffered considerable damage to the point of total collapse in some of parts thereof.
Today, it is remarkably restored and the work that has been and still continues, with respect and respect for the local tradition, is harmonized to the greatest possible extent in the monastic environment, without altering the character of the monument. It is a point of reference in modern Thesprotia, with a resonance throughout the wider region of Epirus. Thousands of people, mostly pilgrims and tourists, visit it all year round, arriving here either on organized group trips or even individually. The monastery operates according to the rules of communal monasticism in the livelihood of the monks, but also in the typical and accept pilgrims every day from sunrise to sunset. It does not have a guest house for large groups of pilgrims and the hospitality is only possible upon agreement.