Each and every village has a different story to tell 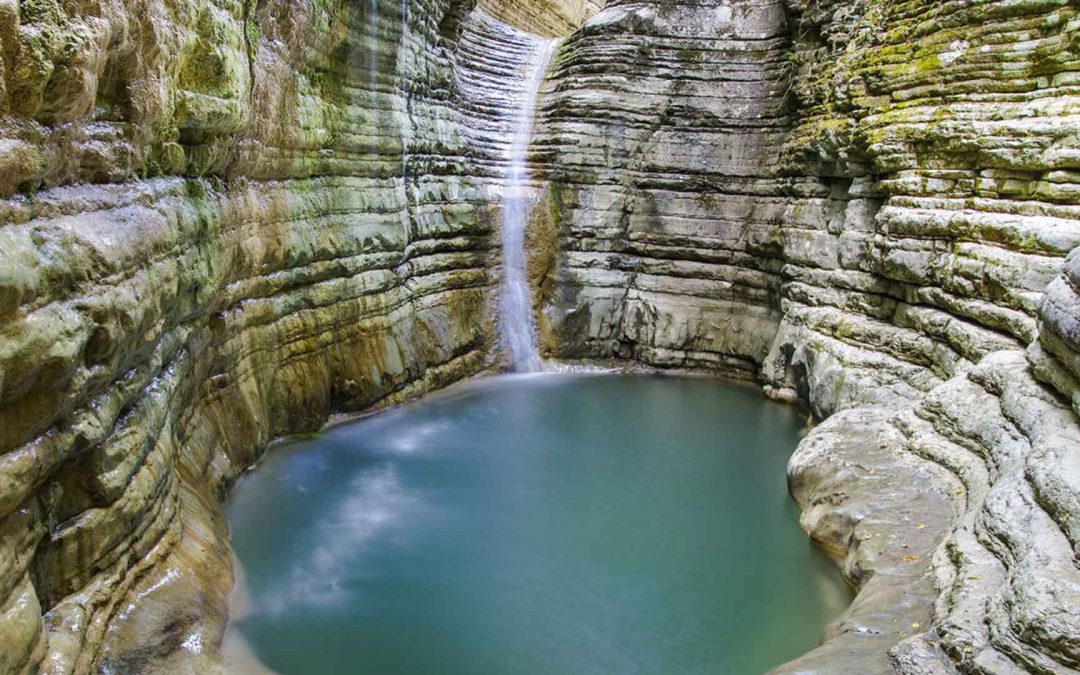 Papigko
Papigo is built at the foot of Astraka. Separated in two districts, Megalo and Mikro Papigo, which are two kilometers apart. An impressive feature of the landscape is the five imposing “towers” of Astraka, which rise above the settlements. The square of Megalo Papigo is located at an altitude of 960 meters. Important monuments are the Church of Saint Vlasios (1852 AD) built on ruins of an earlier temple (912 AD), the bell tower (1887 AD), the elementary school (1897) and a valuable library of Mich. Anagnostopoulos, the Church of Saint Georgios (1774 AD), the Holy Church of Saint Paraskevi, considered the oldest of the village, the church of Panagia Paliouri (980 AD)
On the way from Megalo to Mikro Papigo there are small natural pools called swimming pools. Mikro Papigo has an altitude of 1000m. An important monument is the church of the Taxiarches, its temple has ornate decoration and separate icons. In Mikro Papigo there is the Information Center of Nature and Culture in Zagori of the Greek department of WWF.

Agios Minas
The village of Agios Minas was founded around 1750 AD, its original name was Research and it is built at an altitude of 640 meters. Tradition says that this large settlement was dissolved after a bloody confrontation between the families of the two notables of the village, Stamati and Gerani. The present name of the village comes from the homonymous church. The present location of the village is not that of the large settlement, which was located west of the castle and experienced a great prosperity during the Byzantine era. I. Lambridis places here the Byzantine town of Runicikos, famous for its wealth destroyed by the Turks in 1385. The fortified hill “Kastraki” constitutes the center around which the settlement was developed from the Hellenistic period. It is believed that the area was used as a camp by the king of Epirus Pyrros.In the period of the Greek-Italian war the area was used for the defense of our army, while in 1943 the village was burned by the Germans.

Mesovouni
The current location of the village, at an altitude of 630 meters, does not justify this name because it is not located very high on the mountains. It was moved to this place by its inhabitants, from its old area near the icon of Saint Charalambous, which was a really mountainous region. It is unknown when exactly this village was founded. It existed however, before the arrival of the Turks. In its present position it was moved in the early 16th century. Until then, it was in the “Paliohori” site. At the end of the 17th century, the Turkish-Albanians of Karamouratia violently beat the real estate of the villages of Saint Minas and Mesovouni. The inhabitants of these villages finally moved out. The Turkish-Albanians sold the fields of Mesovouni to the abbot of the Ravenna Monastery, Daniel.
Abbot Daniel installed families in nearby areas in the area of Messovouni in the year 1745. This year is considered the date of establishment of the present village. Around 1750, the abbot of the monastery Artsistas, Damianos brought zeugitae (laboureurs) to cultivate the fields, who settled there permanently. Its inhabitants did not travel and the village did not have the evolution of the others. Until 1860, there was no church, and there was only a classroom-2 classroom – where reading and writing, and elementary mathematics, were taught.
In 1885 an elementary school was established with 4 classes. At the same time the population was 140 people. In 1940, during the Greek-Italian War, the village was abandoned and plundered by the Italians. Two houses were burned and there were 7 victims. An important monument is the church of the Assumption of the Virgin Mary 1858.

Aristi
The oldest name of the village was Artsista. This place name comes from a plant species, the Albanian arrc-i the ending -ishte or the -ishta article, which means a place where a species of shrub or tree or grass develops. The village is built on the slopes of the Koudounata and Grambala Mountains at an altitude of 650 m, and is located 47 km from Ioannina.
Tradition says that the village was inhabited by the inhabitants of Vopati, a village opposite to Aristi, who, because of falling rocks and killing of people and animals, were forced to abandon their village. Families from Saint Minas moved to Artsista. Its inhabitants traveled mostly to Serbia. The women who stayed behind, worked hard and often arranged marriages for their underage children. In 1380 the village was fortified by the Despot of Epirus in order to confront the Turks. It was one of the first villages in which schools were founded, and from the second half of the 18th century, a school operated based on peer learning, in 1895 in Greek and from 1900 a Girls’ School, operated as well.
An hour and a half west of Aristi, there is a small lake, the Lake

of Artsista. On its eastern bank there is a large hill, where are the ruins of Galbahi (a village of 20 houses that dissolved around 1840). One hour west of the lake, the 100 huts are located, where the women who cultivated the surrounding fields lived. During the Greek-Italian War of 1940, the area was the defensive line of the Greek forces and the hills of the village, the famous and fortified Grambala, were inaccessible to the Italians.
Τhe village of Vikos or Vitsiko pertains administratively to the village of Aristi. There are different versions for this place name. The first version claims that the word Vitsiko has a Slavic root and means “a place where beans are found”, while the opposite view claims to have an Albanian root and means a monsoil bridge, the pavement.The settlement is built at an altitude of 770 meters, at the western entrance of the gorge of Vikos, from where it got its name. The place where the settlement is built offers breathtaking views in all directions but mainly towards

the gorge of Vikos, with the springs of the Voidomatis river and the chapel of Saint Mary distinguishing just below the settlement and a large part of the gorge being visible from the observatories.

Vikos
The settlement of Vikos pertains administratively to the local community of Aristi. It is named after the homonymous gorge. It comes from the Albanian vig-u, which means bridge. It is located at an altitude of 770m. and is 5km away from Aristi.It is built in the extreme end of the peak of Kastraki (1335m), above the springs of Voidomatis offering spectacular view of the gorge of Vikos. Around the stone-paved square is the old school and the church of Saint Trifon (1971). Vikos is one of the starting points for a hiking trail in Vikos Gorge. Within 45 minutes of the Voidomatis springs, there is the Monastery of Vikos’ Saint Mary. Today, only the sanctuary is preserved, which was built in 1738.