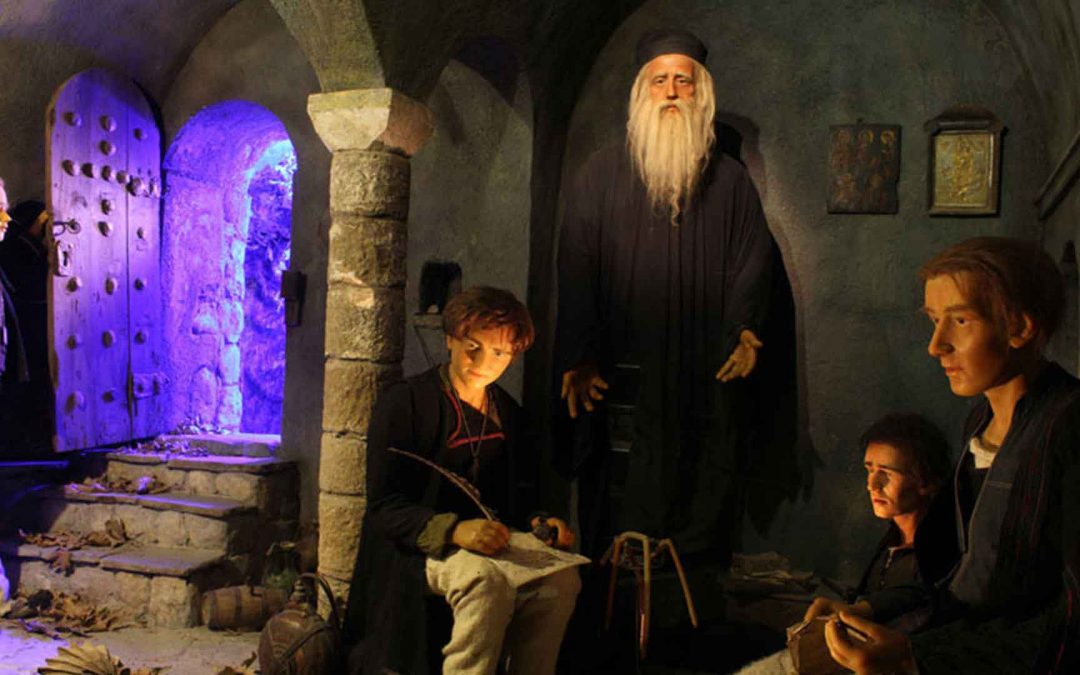 The opening hours for the whole year are: daily from 10:00 to 16:00.
The ticket office operates daily: from 10:00 to 16:00 –
6 €: General Entry
€ 4: Organized groups (via travel agencies, etc.), Students (with their identity)
3 €: 8-17 year olds, over 65s, large families (includes thirds), unemployed (OAED card demonstration), Club Members and Associations (parents and children – please have the necessary supporting documents such as statutes, stamp, etc.)
Free of charge: Children under 8 years of age, armed, disabled (people with severe motor problems come only with the help of their escorts, due to the specificity of the area), members of EETE (by showing their membership card)
Phone: 26510 92128

The Cave of Perama
A three-storey palace with unparalleled beauties and marvelous ornaments, among the most beautiful in the Balkans, created nature in the bowels of the Goritsa hill, crowning the picturesque village of Perama. The ornaments chosen by nature were among the most beautiful and richest. It lists 19 species of stalactites and stalagmites, while in other caves there are 6-10 species. The cave is part of an underground river bed, which was built during the pre-Ottoman period, about 1.500.000 years old (Ioannis Petrohilos). The Cave of Perama, Ioannina, is located in the southern hills of Goritsa hill, at the highest point of the center of the village of Perama, ten meters higher than the middle level of Lake Pamvotis and at an altitude of 480 meters. His feet are washed by Lake Pamvotis Ioannina, which became famous with the legend of Kyra-Frosini and Ali Pasha.

The Tower of the Clock
It is located at the most central point of the city and is a successful blend of neoclassical, Mediterranean and Oriental rhythms with characteristic fountains covering the four sides. Osman Pasas Kourdos, the general and general commander of Epirus and Southern Albanian from 1897 to 1905, wishing to celebrate the Sultan’s Abbey Abdul Hadith Han, decided to erect a memorial tower for this purpose by employing the architect Pericles Melirritos who used it for construction of builders and stonemasons of Konitsa, Kastaniani and Vourbiani. It was set in a very short time in the center of the lower square and not in the place where it is today. In the summer of 1922 during a parade to commemorate the victory of the allies in the First World War, the watch railing was stripped off, with the then general commander of Epirus, Aristides Stergiadis, demanding that the Mayor of Ioannina, G. Ioannidis, be transferred to another position. On the mayoralty of Vassilios Pyrsinella in 1925 the restoration was carried out with the replacement of the broken bell.

The tomb of Ali Pasha
Northwest of the mosque, there is the monument that hosts the tombs of Ali Pasha and one of his wives. It is a rectangular ground monument, divided into two sections. The tombs are the first. Undoubtedly, the original construction of the tomb, where Ali’s headless body was, was particularly magnificent and impressive. The existing iron railing is an imitation of the authentic wrought iron railings, which survived until around 1940.

The “Cooking Place” of Its Kale
In short distance north of the Cultural Center of the Municipality of Ioannina lies the building complex of the Turkish Cookeries, built in the late 18th century or early 19th by Ali Pasha and his son Veli, to serve the needs of staff of the seraglios of Veli Pasha, which was built at the lower levels of the hill Litharitsia. It is a rectangular, large building. Many interventions were made during the use by the military. After extensive mounting works, made between 1995 – 1997 by the Municipality of Ioannina, it now houses the departments of the Cultural Center. The building was probably erected by Ali Pasha in the years 1815-1820. It is one of the most important surviving buildings in the area of southeastern citadel (Kale) of the Castle and it was one of the basis of the Ottoman fortification complex. The building is of ground floor, stony, rectangular and covered by vaulted roof with the characteristic chimneys of a Home. The interior space is divided by massive pillars and arches in two elongated spaces. In the thickness of the northern wall a small tank system is located, which was part of a larger, extended on the same side. The pool and fountains, which were inside the “cookery” served the needs of the production of food. For room lighting there were elongated windows. The “cookery” had received many minor interventions by the Turkish and the Greek army without altering its original form. The building has been intensified and restoration work has been done. Today it houses the cafeteria of the site of the internal citadel.

Stoa Liampei
Stoa was built after the arsony of Ioannina in 1869, during which most of the old Ioannina market was destroyed. The shops housed inside, were built with stone and had arched doors of thick iron door wing, large windows and cellars. The floors were stone built or of tudor style (wood paneling with plaster). These usually were inhabited by the families of the shopkeepers or employees. The gallery is decorated with fine stone reliefs. It is not built in a straight line (the only one) and among old shops it comes out into Canningos street. In the middle and on the left there is awell. Today it houses mainly fun shops and restaurants.

Turkish Library
The Turkish Library is built very close to the Northwest Acropolis, and is probably connected with Hestia and Mendrese (the Teaching School) of Aslan Pasha, forming a religious-educational complex.The characterization of the building as a library is due to the large number of manuscripts and printed books that information was there. The building includes a reading room on the first floor, two small rooms on either side of the entrance with a narrow, lofty hallway between them and an open porch. The latter is formed on the façade of the building on the first floor with a rooftop arbor, where it ends up on a stone scale.
The view of the scale is structured with two uneven arches, from which the underground floor is formed in a vaulted entrance to the ground floor auxiliary spaces of the building. The two small apartments have a fireplace. The corridor leads them northward to a large, square-bricked room, the reading room. Outside, the trunks of the rooms and the corridor have a conical dome roof, while the porch is covered by an independent woodcut. The building is illuminated by several windows.