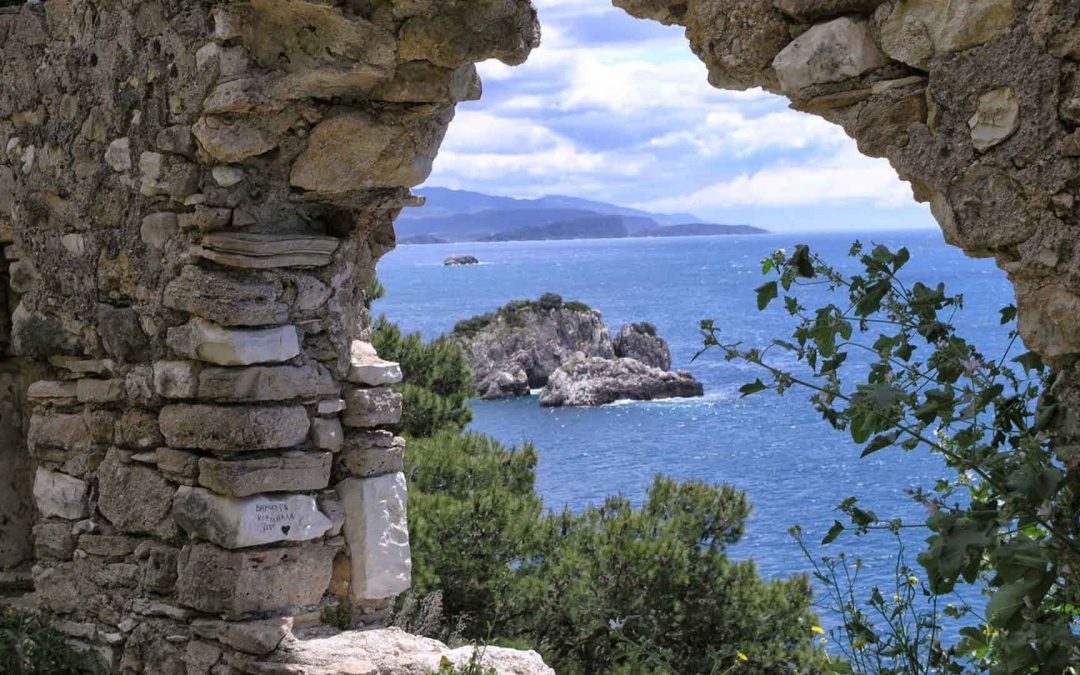 The Castle of Parga
Castle of Parga is found on the top of a hill overlooking the town and was used to protect the town from the mainland and the sea. Its present form is the result of the major reconstruction at the end of the 16th century. In 1360 the locals of Parga in order to avoid the attacks of the Albanians transferred their village which was far from the sea to its present location. During that period, with the help of the Normans who held the island of Corfu, the fortress of Parga was built.
Before the reconstruction of the castle in 1572 by Venetians, the Turkish destroyed it once again. The Venetians rebuilt for a third time a perfect strong fortress that stayed impregnable for centuries. They built eight towers outside the Castle and two cisterns to supply the Castle with water in times of war. Inside the narrow space of citadel there were 400 houses, located in a way so that they occupied only a little room, far away from the seaside.
On this castle the free-besieged population of Parga and Souli fought epic battles and kept their freedom for centuries. From the faucet “Kremasma” the tanks of the castle and the houses were provided with water. The castle for it’s provision used the two bays: of Valtos and Pogonia. In 1797 the area, along with the Ionian Islands and Parga, fell into the hands of the French, and in 1800 proclaimed free city status with broad authority under the protection of the Sublime Porte. In 1815, with the fortunes of the French failing, the citizens of Parga revolted against French rule and sought the protection of the British.
Today, the Castle of Parga is a great exponent of the Venetian architecture, as such architectures dominate. It has some interesting details, such as the Lion of Venice in the entrance, emblems of Ali Pasha, two-headed eagles, some inscriptions and a secret path to the sea. The location of this castle obviously provides magnificent views over Parga and the shoreline. It is also a peaceful area to go for a walk, surrounded by cypress trees and crossed by stone trails. There is a café inside the castle that offers drinks and snacks, in case you get tired, as well as some interesting gift shops to buy souvenirs. The most common way to go is a steeped street coming out from the center of the town.

The Castle of Ali Pasha
Between Anthousa and Agia, on a hill that dominates the entire region of Parga, it’s built a massive imposing fortress, “the castle of Ali Pasha“. This is the fortress built by Ali pasha to supervise and lays siege to Parga.
On 17 February 1814 sowed death unannounced to the inhabitants of the region and especially in village Agia. Avenged in this way the autonomous those inhabitants who had sided with the citizens of Parga.
The same year, tricking the French commander Ionian islands Danzelot with a smart letter, and builds the castle. One european architect built this for effective defense. Inside there is a vaulted regional corridor in the big tower with internal arches. Two Russian guns that he bought  lying on the ground.
The castle is in good condition today. The view is more than spectacular, especially at night when it is lit up in events period.