Charming east side of Zagori 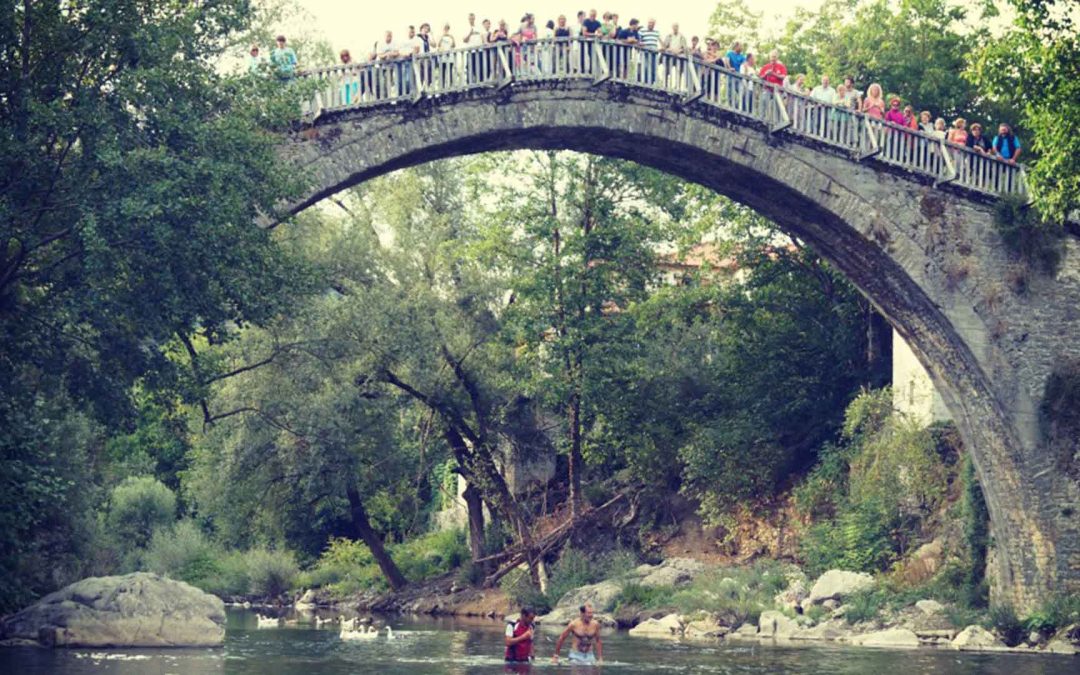 Anthrakitis
Anthrakitis is one of the 43 communities of the Municipality of Zagori, 50 km from Ioannina, built on the northeastern side of Mount Mitsikeli, at an altitude of 730. The urban form of the village is circular and monocentric, as in almost all the Zagorohoria. In the center of the village is the square, in the middle of which stands a large plane tree and around it grows the houses of the village..
Inside the village there are three bridges. A one-stop shop is located at the “Lakkos of Pasia” site, one at the “Lakkos Lefkas” site and the third at the “Sipopato” site. There are also other bridges around the village, namely one at Fteri, one at Tsionia pit, one at “Founta”, one at Seltsiana, one at “Katsilekkos” site and one at the “Budasia” site . Apart from the stone bridges in the village there are also several fountains with the main central fountain of the village located in the upper macales as well as some old cobblestone tiles. * Information about the writing of this from Petroula Vasiaka’s book “The Anthratos of Zagori and the Municipal Song”.

Vovousa
Built on the two banks of the Aoos River, Vovousa (Bayeasa) is adorned in its center with one of the finest stone-built bridges of Zagori, built in 1748 by Alexios Mishios. Joined in Zagori, Vovousa experienced great growth during the period of autonomy of Zagori within the framework of the Ottoman Empire. Historically, it appears 1000 years ago with five settlements (Baitani, Plaka, Saint Paraskevi, Tsiaska and Saint Dimitrios), and later it is joined in one..
In the census of 1817, 270 families lived in the village, which meant 2500 inhabitants. In the same year, Albanian and Vlachs’ premeditated attacks forced more than 120 families to flee and emigrate. In the period from 1824 to 1831, due to the robbery raids, Vovousa remained uninhabited.

Greveniti
Greveniti is built at an altitude of 980 m and is 44 km from Ioannina. It is one of the vlach villages in the area of ​​Zagori and its inhabitants are engaged in farming and logging. It has a spectacular view, too green, surrounded by forests and plenty of running water. Its houses do not have the traditional character that the visitor encounters in Zagori but maintains traditional architecture in churches and cobbled streets. Greveniti, along with many other villages in Zagori, has been named “Martyr village. Apart from the churches, other sights in the area of ​​Greveniti are the stone bridge of Kourtia and the small “lake with the water lilies”, located just outside the village. Valuable, of course, are the stone fountains that exist in the village. They could not be missed because, as mentioned above, the village has plenty of running water.

Demati
The “Demati” community was initially identified with the name “Demati” with its unique settlement and its seat “Demathi”. Then, on October 16, 1940, the “Demathion” type was established as the official name of the settlement and the community. On March 19, 1961 the settlements were identified and annexed to the community: “Agia Varvara”, “Agios Georgios”, “Voutanasai”, “Miliotades”. VD Ch. Vlachopoulos informs us that Demathis was an official Christian spell, a bulldog, who did not embrace Muslims. When he was discharged, he received the site for his property in return for compensation.

Elatohori
Εlatohori is built at an altitude of 1,100 meters, at the foot of the Tsuka Gina peak. It is 57 km from the city of Ioannina. Until 1927, the village was called Chernysi and with this name Fesodervenas (“… and Chernysi dawned …”) is mentioned in the Epirotan folk song. Every year, from August 5th to August 7th, in the church of Agios Athanasios, there is a feast for the celebration of the Savior.
Above the village rises the top of Tsuka Gina. In the area of ​​Elatohori there are lakes, stone bridges, rivers and forests. Within walking distance from the village there is the mountain of Tsouka Rosa, which consists of pines, firs, beeches, rosemary, plane trees and of rich fauna such as wild boars, rabbits, bears and other wild animals.

Itea
Itea is located in the eastern part of Zagori and is 36 km from the center of Ioannina via the old provincial road of Ioannina-Trikala and only 15 km via Egnatia Odos. It has a total area of 18000 acres, of which 4000 are arable, 3000 forest and the remaining 11000 are designated as a grazing area. Until the year 1747 or 1749, the village was named Duchanista. This period was completely destroyed by the Turks for retaliation.

Kastanonas
The old name of the village was Dragari, while nowadays, it is called Kastanonas because of the many chestnut trees in the area. Drougarios Michael, a Byzantine officer, was the founder of the village as well as the church of the Virgin Mary. In 1870 the village had 310 inhabitants. The inhabitants in the past immigrated to Romania and Asia Minor and are engaged in viticulture, carpentry and logging.
Pine trees, firs, beeches, chestnuts, walnuts  create the image of an alpine village. Important monuments of the village are the church of Panagia and Saint Athanasios (1798).

Karyes
Karyes belongs to the Local Communities of Eastern Zagori Municipality and is one of the 43 of the new Municipality of Zagori. It is located between Miliotades and Kavalari. It is a mountainous settlement on the southeastern terminals of Mount Mitsikeli, at an altitude of 630 meters. It has plenty of water and good pastures The village does not follow the typical architectural style of Zagori, as the houses are new and covered with tiles or tsigos. Very nice is the newly built church of Agia Paraskevi. In the place where Karyes is today was the Mongolians settlement, which existed before the conquest.

Kavalari is a very old village, without the historians identifying the time of its foundation. It seems, however, that it was already inhabited by the conquest of Ioannina by the Turks in 1431.
Nowadays, compared to other villages, Kavalari keeps people. They have a very nice village with the old fountain. The central church of the Holy Trinity is remarkable, high in a prominent position, in the form of a castle, built in 1743 and is preserved. A truly impressive building is the temple of the Vassiliki style. According to the inscription located above the western entrance, the present temple was built for the third time in the same place in 1788.

Flabourari
Flabourari is one of the 43 local communities of Zagori with an altitude of 1001m., Surrounded by rich pine forests and beeches, abundant cool springs. It is included in the eastern part of Zagori. From the catastrophe, the small stone bridge that connects the two neighborhoods of the village, a work of 1748, as well as many cobblestones. Other churches of the village are: Agia Triada, on the eastern side of the village, in the middle of which there is a small well from which all the villages around Agios Georgios came in and around the village, Agios Athanasios, in the west part of the village and Prophet Elias, built on the western hill outside the village.

Doliani
Doliani is built at an altitude of 920m. on a river bed, at the site of Calderousa. In the last century, there were 450 residents and in 1913, 300 residents and 25 children at school.In 1943 Doliani was burnt down by the Germans. It is said that 93 stone-built houses were destroyed. The village retains many things from its old glory, such as its beautiful cobblestones, the stone fountains, the church’s loggia and its bell tower, its few old houses, the stone bridges, as well as the one-arched bridge, which can be seen from the public road.

Makrino
The geographical area of ​​the Municipality of Zagori includes the village of Makrino. It is located in the north-western part of the Municipality near some of the springs of Varda-Arachthos, built on the slopes of a hill full of flora. The community area is about 20.1 thousand acres. The lower area has an altitude of 900 meters. and the highest 1,750m. The middle village has an altitude of 1000m.
On the south side of the village there are ruins of an ancient wall. There was an altar with reliefs of Mars, Apollo and Hera. In this area today is the chapel of the Holy Trinity. An important monument is the monastery of Panagia (1700), painted by Kapesovo painters.

Τristeno
Tristeno is located on the western slopes of the central mountain range of Pindos at an altitude of 940 meters. The Tristeno of the Drestenikon District of Dodoni until 1927, where it changed its name, is not known when it was created as a village.
Sight of the village is the church of Agios Georgios, built with classical Zagorian architecture in 1793. Few buildings are preserved in the classical Zagorian architecture.
A reference point of the village is the traditional stone-made watermill built in 1835. It is one of the last watermills in the country in operation. Finally the stone bridge that connects the village that has cut the Goura stream crossing the two.

Petra
The village of Petra in the prefecture of Ioannina is located northeast of the city of Ioannina and is about 40 km away. It borders East with the villages of Chrysovitsa and Small Pigeon, to the South with the Great Peristeri and Demati, towards the West with the former community of Itea and north with wooded areas. In the area of Agia Paraskevi the two magnificent rocks dominate, where one should exceed 55 meters. The climb to the rock should be done in the past with a wooden staircase.